Flowers for a Sculpture - Sarah Myers


Rich apricot blooms, exquisite purple-pink roses much tinier, and sprigs of lavender – all flowers from my sister's desert garden – mingle with bougainvillea and dark orange-tree leaves from our orchard. The fragrant bouquet fills the bowl of my terracotta sculpture; with assured dignity she carries the autumn wealth of the garden poised lightly on her head. The light makes stars and streams in long beams through the dark, intricate lattice-work of a handmade screen from India, while under the sculpture's feet, where her long skirts sweep the ground, are the delightfully bright tiles, orange, green, blue, of a small table from Mexico. In these images you are seeing a corner of our home in the desert.

Woman with a Diadem - Drawing by Sarah Myers

One of my favourite drawings from the last year is this imaginary portrait, a woman in a Greek style of diadem. Minimal lines match the classical curves of her hair and headdress and the graceful tilt of her head, which is caught almost, but not quite, in profile. The sketch is rendered in strong black charcoal, like the others of my pictures in this long series. More of this collection is arranged on my site SarahMyersArt.com.

Posted by Sarah Myers at 9:45 PM No comments:

Lady with a Schnauzer - Drawing by Sarah Myers

A lady holding her small dog sits in front of us. The pet's small paws are draped gently over the woman's protective arm; fluff of brows and whiskers on the dog prevent us from seeing its eyes. But we can tell from the line of its body that it is pleased and relaxed, in contrast to the somewhat more watchful expression of its owner as she glances intently out of the picture to our left.


This minimalist drawing in charcoal is part of a large series I have made; many of them, including the sketch here, you can see on my website, SarahMyersArt.com, under “Drawings”.

The duck eagerly flaps her bright white wings as she rises on tip-toe. Simple lines describe this friendly bird who has come to shore to see us; the black charcoal defines beak, eye, neck, and especially the feathers that curl as she briefly, gently, lifts herself on the impulse of her smooth wings.

With flowers and fluttering ribbons among her ringlets and with dangling earrings which swing as she tilts her head, she looks toward us - she almost smiles… This imaginary portrait is a minimal drawing in charcoal; dark, definite lines describe face, curls and the flying streamers. She is part of my long series of sketches in a more simple style. You can see much of this collection of drawings on my website, SarahMyersArt.com.

Posted by Sarah Myers at 9:54 AM No comments:

Here is a dancer with a scarf. The folds of her robe and the folds of her scarf ripple across the air in hurried curves as she sways to unheard music.


This sketch was inspired by Renaissance or Mannerist art which shows dancers holding scarves or ribbons – images that were in their turn inspired by late Roman art. My vision grew more modern as I drew, lines scattering over the paper to portray the quick movement of body, cloth and expression. 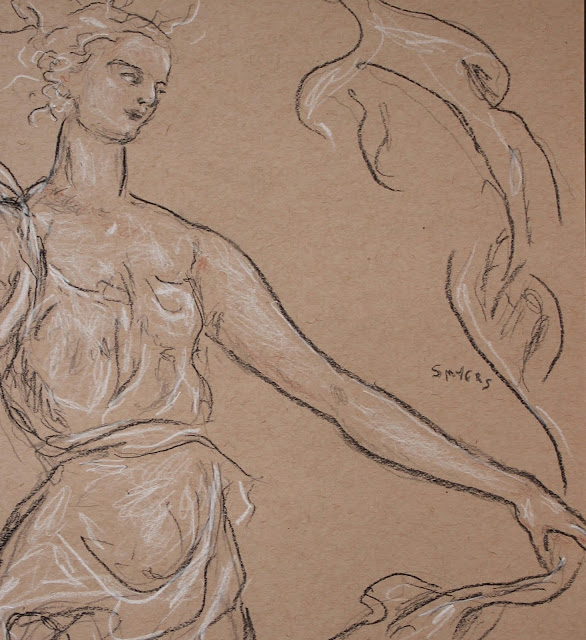 Here is a goose swimming gracefully through the water, looking at us as we watch him. The hot summer sunlight shines down; as it makes the small lake a pleasant place to drift along it turns his feathers a dazzling white, throwing his form into a single simple, bright outline. This drawing of a bird is part of my series in minimal line, more of which you can look at on my website, SarahMyersArt.com.

Posted by Sarah Myers at 7:39 PM No comments:

Her arms full of a sheaf of calla lilies, a young woman smiles back at us. Black charcoal describes only the outlines of flowers, face, eyes, to place her presence on the white paper.


This is one in a series – a long, long series – of line drawings I have created, which I want to introduce on this blog. And also, I welcome you to visit my new website, SarahMyersArt.com, where you can see this drawing and many more in the same style.

Posted by Sarah Myers at 8:28 PM No comments:

My newest painting is a still-life with two water-pots - one holding small date-palm fronds – and between them a cluster of rich red grapes. The larger of the two vessels is a majolica piece decorated in happy, bright patterns; the smaller, with its dignified stance and deep terracotta colour, is pottery created by my sister Amy. Overhead, the sharp, fragile leaves of the palm reach out to embrace the whole – the two jars, a white wall, and the fruit tumbling forward toward us.

Posted by Sarah Myers at 9:35 PM No comments:

Lady with a Crystal Vase - Minimal Drawing by Sarah Myers


This sketch is of a lady delicately poising a crystal vase in her hand – the single, top-heavy bloom leans toward her as she glances away. The ornate trim of her dress matches her dangling earrings, and all of the detail makes the drawing, perhaps, not quite minimal; but still, every part, from pearls in hair to the curve of fingers, is described by black lines that touch the paper sparely and simply. And we wait for her to look up out of the page, in our direction...

Why Art? - Thoughts on artists and their work. Sarah Myers

Woman with a Mirror - Sculpture by Sarah Myers

Quietly she looks down at the small mirror in her right hand; her left hand holds her loosely twisted hair atop her head. It is a passing moment; the downward glance, the strands of hair wrapped through the fingers, the tranquil expression that is almost, but not quite, a smile.


I created this art some years ago, trying to capture an action so reserved and so transient that, in the silent calm of a sculpture, it could become timeless.

Sketch of a Face - Art by Sarah Myers


Here is a sketch, a woman looking out with large eyes – perhaps she may smile in a moment and the grave expression of her glance will lighten… The forms are created with rapid lines in direct charcoal, strokes that are almost abstract in themselves; only once they are placed together are descriptive of the eyes, of the slightly curved mouth or the wisps of hair curling over the forehead.

Posted by Sarah Myers at 8:08 PM No comments:

Drawing of a Horse - Art by Sarah Myers


Minimal lines depict the expressive head of a horse, eyes watching intently, one ear tilted back to listen. The curl of the large nostril, the strong neck and chest, the fall of the mane, control the firm course of the charcoal as it stretches across the page.

Posted by Sarah Myers at 8:42 PM No comments:

Autumn with her tall basket of fruit, a wreath of windblown leaves crowning her dark hair, gazes forward; her dignified profile forms a contrast to the firm lattice and heaped fruit of the bounty she holds. This artwork was created from three kinds of paper; charcoal line-drawing stating most of the shapes, which were then hand-cut and assembled in collage.

Posted by Sarah Myers at 9:19 PM No comments:

Pigeon with a Branch - Drawing by Sarah Myers

Simple lines describe a pigeon – or dove – with a sprig of olive in its beak. As a drawing she is partly the symbolic dove of peace but also simply a real, purple-grey pigeon, humorously plump and happy, who decided to build her nest on our roof, and who is holding a twig she has found before flying with it to her new house. Minimal line, charcoal.

Do you see the cold wind blowing, the comforting ruffle of a great coat collar, the flying feathers clasped to a hat, as the lady glances back across her shoulder? Here is my paper cut-out, or decoupe, of Winter. It was made to be a counterpart to my earlier piece of 'Summer', and I finish it at a time when a mild winter has already fled from the desert. But perhaps my friends on the other side of the equator will see the coming season, and those north of me, who are weary of long wind and cold, will see that even this lady in her warm coat is turning away as if in farewell…


She arrives with a curved basket, full of spring brilliance, and with a cluster of tall plumes twisted into her hair. Her eyes are thoughtful, her head tilted elegantly toward her armful of new flowers.


My latest sculpture, she is formed from vivid red terracotta and was finished with about a day's worth of work, keeping the spontaneity of her creation through to her kiln-fired completion. Now she is bringing you a bouquet of blooms from the garden – jasmine, bougainvillea, pelargonium, nasturtium and long sprays of lavender.

Creating drawings of this type is very intriguing, as the basic technique is almost opposite that of a usual sketch. Here, the ground of the paper must be used as the shadow, rather than the highlight. It is the density and strength of the pencil that determines the brightness of the glow. Because I have purposefully left the white charcoal unblurred and unblended, you may see in the details the myriad of tiny lines that form the face's shapes and expressions.

Woman with a Small Bird - Sculpture by Sarah Myers

She looks at the small bird held lightly, carefully, in the palm of her hand. The bird gazes back, its head slightly turned to catch her in its view.


The woman sits with one knee drawn up, the other leg bent as she sits on the ground; her long skirts fall in heavy folds around her. Many elements are meant to convey a connection, over the millennia, with the bright, gentle spirit of the Tanagra figures from ancient Greece. But though she is of the same lively orange-red earth – terracotta clay, full of iron, that can be found across the globe – and though she sits so still - motionless, with her tiny finch that never flies away - she is from a much younger world, the one that belongs to you and me...

This is a sketchbook, a scrap of paper; a note, a snapshot, tacked hastily to the wall; the clear margin that runs around life - in which, so often, so much of our lives is found - drawn - jotted down - really lived...