The rain came - but not the angry bucketfuls, splattered by a cold blast, that I know as a Fall storm.  No; this was a slow, methodical rain, descending gently as if from an immense watering-can with very small holes; a gardener's rain, that only loaded each flower petal as heavy as it could bear without shattering the flower.  And all the roses rejoiced.

Paul and Kay at Christmas

There was Paul and there was Kay.  Little Kay was a very active child, and little Paul a very pensive one, and they were both very good around Christmas time -  but they were still Paul and Kay.

You sometimes had to tell Paul which boxes were his, because he might not get near enough to check labels.  After being told, he would sit quietly on the floor in front of the wrapped gifts and try to imagine what was inside each one.

The parents of Kay were impressed by Paul.  Kay never left any package under the tree unexamined.  Every gift was pried at and turned over and shaken and held against the light and rattled gently and generally pawed.  Kay certainly read the labels - she could tell everyone which gift was theirs - she might tell them what it was, too, if the tape had come a tiny bit undone.  But if the package was on the mantle well out of reach even the adults could guess their box contained crystal or fragile electronics that shouldn't be gyrated to produce tell-tale festive sounds.

When they told Kay Christmas cake was coming, she skipped and drummed with a spoon on the edge of the cabinet.

Paul asked what kind of cake.  They told him it had a Christmas tree on top.  This was a mistake.  You can just picture what he imagined; it was downright magical.  In his mind's eye Paul clearly saw the sparkling drum-shaped cake, about four feet across; rearing up from its center, ten feet of swaying pine branches covered with blazing lights and toy soldiers and an announcing angel in gold on the very peak of the tree.

What he got was a sheet cake with a smudge of green frosting in a flat triangle.

Kay ate two pieces.  Paul ate half of one.

I think the adult relatives have almost agreed that Kay and Paul draw even.  They made this decision on Christmas morning, three thirty a.m.

Kay came right down the stair into the front room and stood watching weary adult gift-bearers until they became aware of her presence and lifted her bodily out of the way.

But Paul; well, he was coming down too - the temptation was just as great...  He knew he shouldn't look...  He didn't want to see until the very last second.  He had his eyes closed as he was climbing down the stairs, and he was only a third down when he missed his footing.
When they picked him up at the bottom of the stairs he closed his eyes tight again.  But they let him see anyway...  After all, Kay had already been there.

A Christmas tree with all the gifts is especially marvelous at three thirty a.m.  If adults don't know this, it's because they haven't rattled all the boxes or fallen down a staircase with their eyes shut.

Posted by Sarah Myers at 2:08 PM No comments:

Views of a Small Schnauzer

Studies of the most marvelous little Schnauzer.

Posted by Sarah Myers at 9:59 PM No comments:


A fragile sculpture, caught with my camera several weeks ago.
Posted by Sarah Myers at 9:43 PM No comments:

Posted by Sarah Myers at 9:27 PM No comments:


These are medallions in cut paper inspired by Henri Matisse's paintings and own cut-paper works.

You never realize how frequently a small animal moves until you are poised with a pen in your hand...  How many lines can you place on paper before the little shape escapes from its picture-plane altogether?
Posted by Sarah Myers at 9:11 PM No comments:


When I touched this bloom, a sheet of petals spilled into my hand.  But much of the rose was left and a moment later the bee arrived, to work as diligently at this flower as at newer blooms around it.
Now if only I could post the fragrance...
Posted by Sarah Myers at 6:29 PM No comments:

Dachshund Study and From Life or Photo?

This picture was sketched from life, as were two posted earlier, Labrador and Dachshund Drawing.  Very Small Dog and Pale-eyed Puppy were worked from my own photos.

There is a huge difference between drawings taken directly from life and those from photographs.  Sketching from a photograph is by far the simpler process (objects do not move, the angles are predetermined) and there is information the artist will never discover by any other means - no one knew the exact positions of a horse's legs at the gallop or the air-foil movement of birds' wing feathers until the invention of the camera.

But the artist's eye looking at reality and looking at a secondary image will perceive totally different priorities.  Somehow a leveling occurs with the photograph; not only is every detail visible but every detail is equal.  Viewing the photographic image, the artist finds the corner of a man's collar as intriguing for pencil or brush to reproduce as the corner of his eye.

When you are looking directly at a living thing this lack of proper priority is far less likely to occur.  What was emotionally important when you viewed your subject will, if you are careful, retain its importance in the finished work.  Indeed, you may be forced to simplify to just those important elements in order to finish your study before your sitter moves too drastically!

It is this emphasis on the most expressive elements that gives a sketch from life its true liveliness.  Drawing from life is twice the challenge of working from photography - it often results in twice the Art.
Posted by Sarah Myers at 6:25 PM No comments:

Posted by Sarah Myers at 6:08 PM No comments:

Sketch of a Very Small Dog

Posted by Sarah Myers at 8:55 PM No comments:

Posted by Sarah Myers at 8:54 PM No comments:

These are cut paper medallions inspired by the patterns on antique Mexican maiolica.

Line Drawing of a Labrador 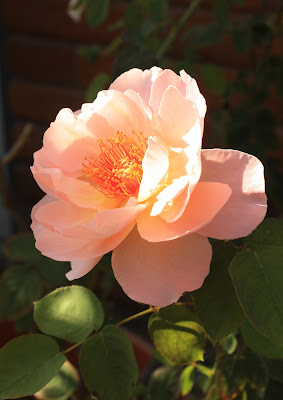 I caught this vivid bloom holding very vivid afternoon sun.  I often position myself so light is behind the object I photograph, if it is consistent with the picture's detail and safety of the camera.  There is something melancholy about having my back to the daylight.  I prefer to face into the sun toward a brilliantly lit subject...

She is not the first sculpture I have lost and most likely not the last...  But she was the latest and the largest.
I could not find an appropriate method for producing a cast, could not ship her and in the end had no room to take her with me.  I might have been resigned to receiving her in a somewhat Mitoraj state at the other end of the adventure.  But a sculpture of her weight, fragility and size (she was life-scale - large life-scale) cannot be packed in a vehicle which is already a solid Rubik's cube of boxes.  So here is a blurry picture of my creation leaning against the wall of the old studio, this written lament, and my growing resolution to make something like her in the future.
Posted by Sarah Myers at 9:44 PM No comments: 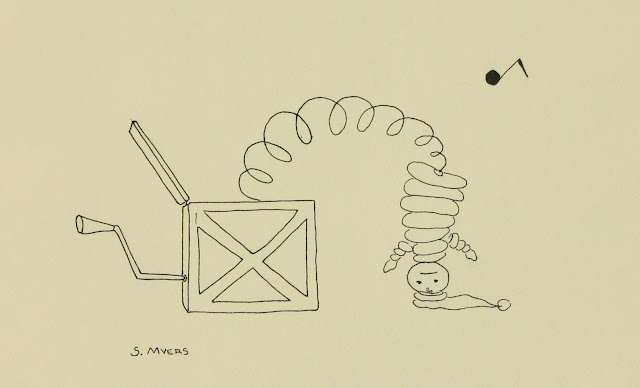 
Fan palms are Art Deco of the plant-world: brash, vigorous, bright.  The strength of their effect comes largely from the size and rigid forms of the vivid leaves, and a slight anthropomorphic character from the way they stand with these leaves held like outspread hands.  Standing beneath several half-grown specimens, I photographed the intense sun through their geometric foliage and came the closest to producing Op Art I have (or ever will) come...

Posted by Sarah Myers at 9:57 AM No comments: 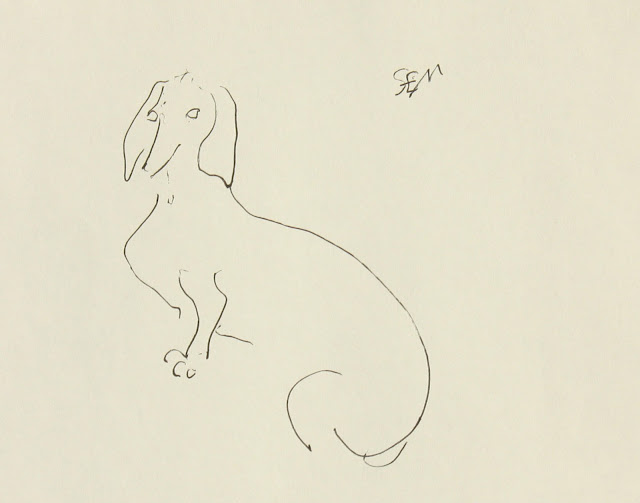 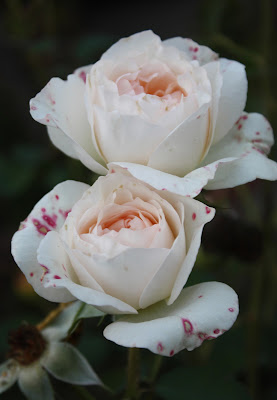 Picture taken several days ago with my Canon.  "Perdita", English rose.  I begin to think it might be difficult for any flower, antique or modern, to surpass some of the current rose varieties in beauty and emotional impact.  I have done what I could to capture these qualities with a lens.
Posted by Sarah Myers at 9:14 PM No comments:


In her latest work the artist has labored to open a door upon the concealed harmonies, the cycles of bloom and growth, and the immense but often secretive order of the human universe.
Correspondingly the artist has struggled to shut out signs of universal dissonance (when Artwork could be Art but doesn't Work), cycles of disintegration and decay (Masterpiece falls to Pieces unexpectedly in front of its Master) and randomness in the human experience (whose worst result is not an Art without any object, which should not astonish the public, but an object without any Art, which alarms even the artist).

But with such goals triumphantly achieved, there often remains intense effort, grinding toil, argumentative dialogue between Art and Artist.  Sometimes there doesn't.  These differences the artist attributes to the vagaries of her Muse.  Therefore - as you will notice - for more effort I do not charge more.  Many other projects go smoothly as butter and take only half the time.  This I attribute to skill and experience.  Therefore - as you will notice - for less effort I do not charge less.

It is the custom to speak of artworks themselves in terms such as the radiation of effervescent inspiration or the transparent vibrations they produce.  I prefer to reverse this approach and look at responsibilities from the other end.  The viewer should not set up vibrations too large or too opaque in the direct vicinity of the artwork and they should not bump it.  It might fall over or drop off a wall.  Nevertheless, bronze has proved a durable substance since its recent invention, and ceramic will last as long as it is not broken.  Even as shards it will endure long enough to imprint remorse and despondency and, if left in the exact spot where dropped, will provide the archaeologist invaluable information on your times, status, and mode of life.  Paper and canvas items should be installed where they will not come into contact with missiles, hand-thrown or otherwise, such as cans, fruit, eggs, boomerangs, bird-shot or gum.  The ideal suggestion for ensuring preservation of any and all pieces would be for buyer to travel to Egypt and arrange to be buried with his collection.  We could then unofficially guarantee a lifetime of about three thousand years (for the artwork).

But the main purpose of my art is enjoyment during the owner's own lifetime.  This should not be difficult.  All discriminating Art enjoys living in the presence of a fine collector, and my works are no exception.  An art's chance to look at an inspiring collector day by day cannot be equaled by any other experience, inside or outside gallery or museum.  Inside or outside the universe.  For the universe is, after all, one immense gallery, with pieces of artistic merit waiting through history - some patiently, some impatiently - for the moment when they can seize their eager collector and keep him forever.
Posted by Sarah Myers at 12:40 PM No comments:

This is a sketchbook, a scrap of paper; a note, a snapshot, tacked hastily to the wall; the clear margin that runs around life - in which, so often, so much of our lives is found - drawn - jotted down - really lived...